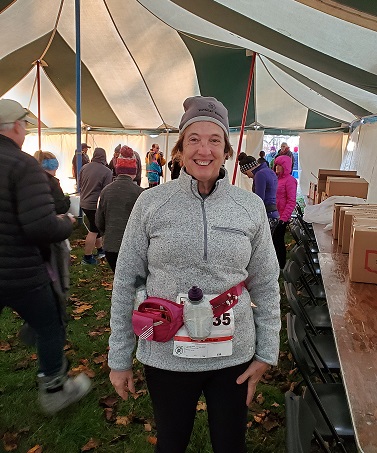 Last weekend I ran the 2019 Buckeye Half Marathon and 10K. Well, I ran the 10K part. Others ran the half marathon.

The 10K ended up being a bit longer than it was supposed to be because the course was set up for the half marathon and then they figured out the 10K. Instead of running 6.2 miles, I ran closer to 6.5 miles. I didn’t think that was all that unusual because races often seem to go long.

The last race I ran was in April. It was the 5K Hop for Hope. I went back and looked at my results from the spring race. My pace for the 10K was a bit slower than it was for the 5K but that makes sense since it was twice as long.

I’m happy with my results. I really just wanted to run the race without feeling injured or sore and I succeeded. Immediately after the race, my right hip was sore.

One of the things I noticed is that because we ran in one direction on the road, we never changed which side was higher on the crown of the road. My right leg was continually on the higher side and it was that hip that was sore. The good news is that by the next morning it was fine.

Early November in Ohio is likely to be cold and it certainly was this year. Temperatures were in the 30’s (Fahrenheit) but it was a beautiful sunny morning so really it was great running weather.

I wore my hat and gloves and several layers. I managed to be comfortable throughout the race. My hands were cold at the beginning but by the end, I’d taken off the gloves. Figures.

The course is a loop through the Cuyahoga Valley National Park. This year it was completely on roads. No trails. The 10K was one loop and the half marathon was two loops.  There were a few hills though much of the course was fairly flat.

Swag also included a great performance sweatshirt, which I was happy to get. Check it out! 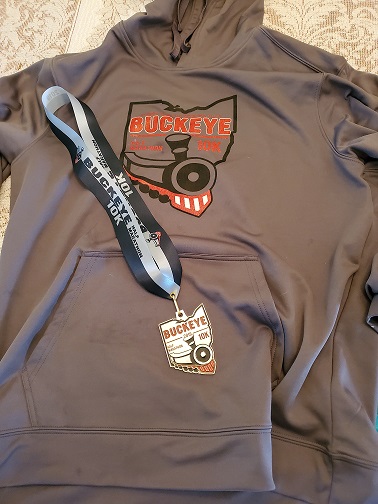 At the finish line, volunteers were handing out the medals. An announcer called out people’s names as they crossed. I love hearing my name announced as I cross the finish line.

The food and water was in a large tent so that’s where I headed. Chris was there as a volunteer. She had the most important job in the tent. She was handing out Buckeye candies. If you don’t know what Buckeye candies are, they’re a creamy peanut butter candy dipped in chocolate. They look like actual buckeyes, which are nuts found in the Midwest part of the US. A delicious but decadent treat.

Running the Buckeye 10K made me realize that I do enjoy racing. I need to make sure that I am fit and strong for next summer’s racing season. I have work to do over the winter!

What races have you run recently? Or what motivates you to keep training over the winter months? Let me know by posting here or on the Becoming Elli Facebook page or email me at jill@becomingelli.com.

2 thoughts on “Recap of Buckeye Half Marathon and 10K”