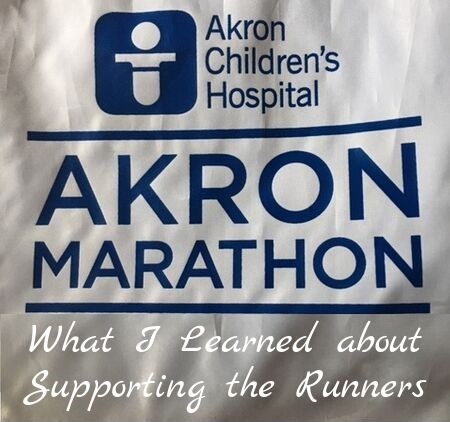 I had an amazing inspirational day on Saturday.

The started with a bit of rain and an amazing double rainbow. I only caught part of it, but how often is there a rainbow at 7 am?? 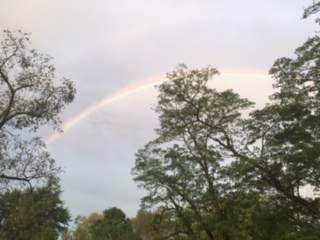 For several hours I cheered the runners compete in the Akron Marathon, Half Marathon and Team Relay through the streets of Akron, Ohio. I was a spectator along with another estimated 99,999 other people!

Over the past 4 years I ran in this race. Both in 2015 & 2016 I was on a marathon relay team and in 2017 & 2018 I ran the half marathon. This year my participation was limited to making it about supporting runners by cheering and high five-ing.

I’ve done a lot of volunteering at water stations over the years (at least 12 different races) and have competed in over 30 races since 2009 (mostly 5Ks and three half marathons.)

As a runner, I know that having someone watch you makes a difference in performance. You just simply try harder. And when the going gets tough, a kind word or even a smile at the right moment can make a really huge difference. I find it inspiring being around people who are working to achieve something really hard. 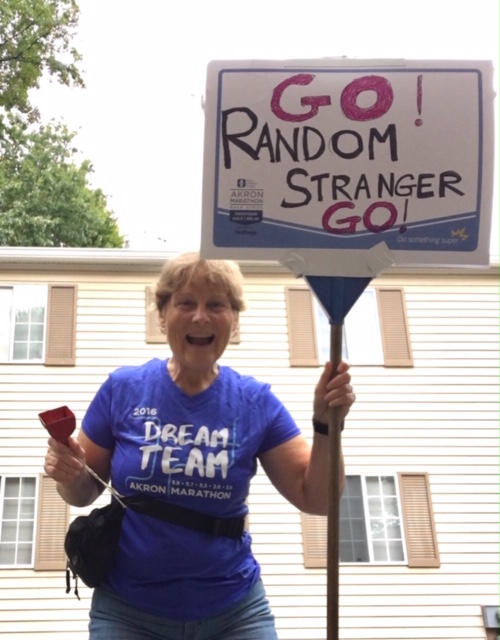 During my time running, spectating and cheering people on, I’ve learned a few things about supporting runners:

One problem that happened a few times with using people’s name. I would say something like “Looking good, Julie!” but as soon as I got the words “Looking Good” out of my mouth, someone else, running right next to Julie would say “Thank you!” It only happened a few times, but made me feel bad, like I was calling out the person next to them and not them!

So, to remedy that, I learned to not use someone’s name if they were running near someone else, or I would use the name first, like “Julie, Looking good.”

It is a similar effect for cheering people on.

Once in a while the runner would looked like they were out for an easy run. They had a quick easy smile come across their face. “Thank you random stranger!!” they would shout back at me! I suspect that these type of runners were pacing someone else. Especially when I was a mile 14 and the runners had just completed a 2 mile up hill section.

While I’ve taken the past year off from running, I still greatly admire the runners and get inspired seeing the determination, courage and struggles. My heart is filled when I participate – as a runner or volunteer or even just as a spectator who is all about supporting runners!

I’m sure you have some ideas, as a runner or a volunteer at a race or a spectator.  What’s the most encouraging sign you’ve ever seen? What phrases have you heard that encourages people the most? Let me know by leaving a comment below or calling our voice mail at 330-970-6662.