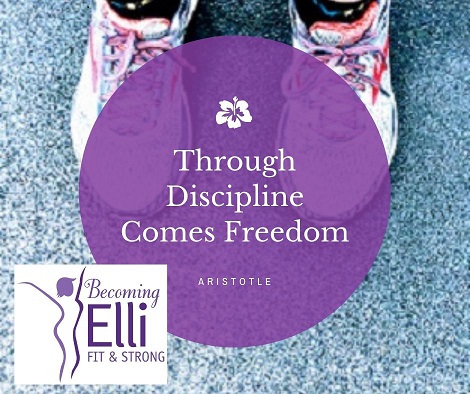 Chris and I talked about the role of discipline in fitness in our podcast episode 35 of Fit Strong Women Over 50, Inspiration, Motivation and Discipline. Chris said she didn’t like the word discipline because it makes her think of punishment. You know, being disciplined by the teacher was what she was thinking about.  I used the word as in being committed to something, as in having the discipline to do what is needed to achieve a goal.

I went to Dictionary.Com and looked for the definition of discipline. Here are the various definitions for the word:

training to act in accordance with rules; drill:military discipline.

activity, exercise, or a regimen that develops or improves a skill; training:A daily stint at the typewriter is excellent discipline for a writer.

punishment inflicted by way of correction and training.

the rigor or training effect of experience, adversity, etc.:the harsh discipline of poverty.

So, you can see that we were both right but just were thinking of different definitions.

When my son was younger, he played the bass in the school orchestra. He loved playing the bass and he played for many years. He went regularly to his lessons and never complained about going. However, he lacked the discipline to practice regularly so he never became as good as he could have.

His friend played the viola. He also took lessons but he practiced regularly and so he became a much stronger musician than my son. I don’t think he had more musical talent but I think he just worked harder. He was disciplined to practice daily and moved ahead in the school orchestra.

The same holds true for becoming fit. We talk about becoming like Elli, certainly a great goal, but we have to plan on how we’re going to actually do that. It takes some work for us to become fit and strong.

The first year that I ran a half marathon, I planned a training routine and I committed to it. I knew how often I needed to run each week and made the effort to do what I needed to do. I also made sure that I did my cross training. When I ran the race, it was great. I was happy with my results and I felt strong.

The next year I repeated the race but did not train as rigorously. I lacked the discipline for training that I needed. I finished the race, though in slower time than the year before, and quickly became injured.

The first part of this year was a challenge for me because I was still dealing with that injury. As soon as I was able, I started to train again. I began lifting weights at the gym and began to try to run again by using my Couch to 5K app. (I’ve written about this recovery before.) As I’ve gotten stronger, I’ve begun to become more disciplined in what I’m doing. I make sure that every day brings some kind of physical activity.

I’m beginning to see the benefits of that discipline. I feel stronger and healthier now that I’m moving more again.

Unlike practicing a musical instrument, practicing fitness means doing different things on different days. Discipline doesn’t have to mean doing something daily but it does mean making a commitment to some level of exercise and sticking to it.

I don’t want to strain certain muscles or joints so I try to mix it up, fitness wise. Right now, I try to go to yoga at least once a week, run no more than three times a week, and go to the gym for weights and boot camp at least three times a week. I also usually have a day where I just go for a good long walk. 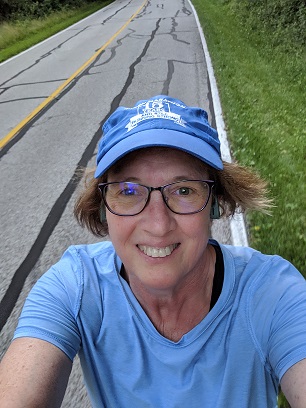 I hesitated to commit to a race or really any kind of event but I’m beginning to see the benefits of having a specific goal on the calendar. If I know I have to run a certain distance on a particular date, I’ll work hard to meet that goal.

I’m starting to look for a 5K or 10K race that I think I’ll enjoy. I don’t know when I’ll be strong enough to run a half marathon. Maybe by this fall, but we’ll see.  Being disciplined in my plan of training and cross training, I may be ready sooner than I think.

How do you use discipline in your training? Or do you just wing it? Feel free to share your thoughts on the role of discipline in fitness.

We’re also discussing this in our Facebook Becoming Elli Group so feel free to join us there too.