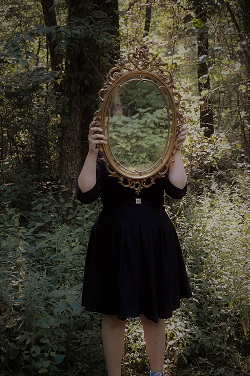 Are we every happy with ourselves? This is the question I asked myself recently.

What? Even in my sleep, I’m worrying about how others perceive me and my appearance? Wow. That was amazing to me. Actually, it’s rather depressing.

Right around the same time as that dream, I had an appointment with my doctor. We were discussing different preventative tests I should have and in response to a question, she said, “well, you’re a woman of healthy weight so I don’t think that’s an issue.” I actually had a moment of shock when she said I was a healthy weight. I always expect to be told that I’m over weight.

Are We Ever Happy with Ourselves?

That’s the question, isn’t it? What does it take to be satisfied with how we look? I don’t know why but I would think this should be something we outgrow but I guess it isn’t.

Chris and I talked about this quite a while ago in podcast episode 14, Getting Past Negative Voices Women Over 50 Podcast. I think that I should go listen to what I had to say then. Maybe it’s time for Chris and I to talk about this again in an upcoming episode.

What about you? Do thing pops up that surprise you? What makes those self-critical ideas come into your head? Let me know because I think it’s something many of us struggle with on a regular basis.