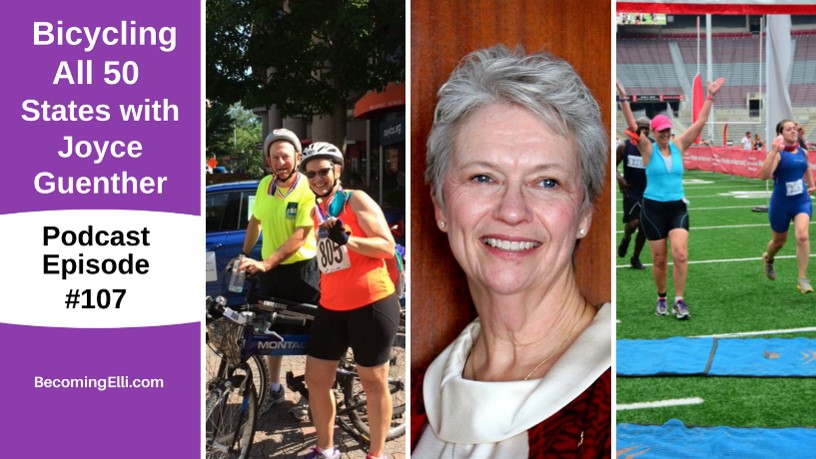 In Episode 107, Jill and Chris talk with Joyce Guenther who has ridden her bicycle in all 50 states of the USA. Jill met Joyce Guenther in high school and they ended up at the same college together. Years later they reconnected on Facebook.

Joyce has completed bike rides in all 50 states and has turned her attention to Europe. She is a member of our private Becoming Elli Facebook Group.

Her education was in the sciences. She worked in business for many years and then ran her husband’s medical office. She lives with her husband in central Ohio and has two adult daughters.

Joyce is also very active with the Red Cross and getting people to donate blood. She hosts blood drives and has been donating blood since she was in college.

More detail about her bicycling all 50 states from Joyce Guenther:

Probably in the mid to late 1990s my husband got this idea that a supported bike ride would be fun. I said, sure thing, thinking that would be the end of it. Well, he signed us up for a Vermont Bike Tours week. I was positive I could not do this. He rode a lot and I really didn’t. I biked around our hilly neighborhood and was freaking out. People, I CRIED getting on the plane to Vermont.

Supported bike tours are a great way to get started. You can rent your bike from them and if you do, they take care of it, fixing flats, swapping out another bike, etc. The bikes are excellent. These fancy tours (Like VBT Vermont Bike Tours, Backroads, etc) provide some awesome food along the way, group activities and a lot of knowledge. One of the guides rode next to me and described the gears/shifting ratios. After that week, I got a better bike and we rode more.

At some point we realized that just by riding a bike on vacations, at home, etc we had biked in 12 states and decided to do all 50. A great way to do this turned out to be Amtrak train routes. We got folding bikes (Montague) and could take the train with them as luggage. (now Amtrak has bike cars and you load your bike in a rack.) We took the Empire Builder from Seattle to Chicago and got off in all the states and biked, got back on the next train the day. This train goes through WA, ID, MT, ND (got a car and went to SD and WY), MN, WI, IL. Most train routes have rail trails nearby. This train goes right through Glacier National Park.

“The best ride we did was the Great Allegheny Passage (GAP) ride from Pittsburgh to DC. This is a 360 mile trail (100% trail, no streets!) If you ride east it’s pretty much flat/downhill. We did this end of June and got to DC on July 4th. We had a high school guy drive our truck with supplies and he met us at the trail head every day. We stayed at motels and B&Bs. You can also camp (and do a supported camp) but NO. That was our 25th anniversary trip. This trail connects to the C&O canal and you pass 76 locks on the way. It’s beautiful.”

There are lots of local bike trips/trails too. The Kentucky Redbud ride (they have pancakes!) was so great and one of the last ones we did which is funny since it’s close by. New York City has the 5 Boro Bike Tour ( in May which is a tour of all the Boros. They close down the bridges which is fun. Chicago has Bike The Drive on Lakeshore on Memorial Day. We do an Armed Forces ride every summer in DC and a Fall Foliage ride in Staunton VA every Oct.  Fat Tire Tours were great.  Backroads was how we did Napa.

After we finished the USA in 2013 or so we started looking at Europe. We did Versailles, Madrid and Barcelona a few years back. We have done a few Bike and Barge tours (Netherlands and Danube) We went to Japan in 2017 and my husband got a rental bike just to say he biked there!