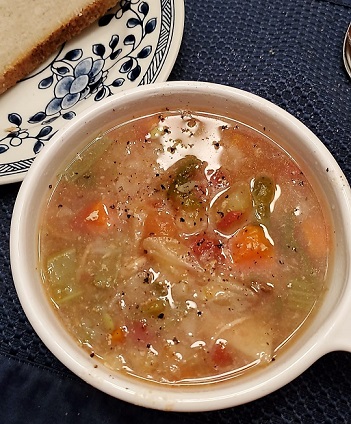 I made a pot of vegetable soup the other day using my Instant Pot. My son and daughter-in-law were coming to visit and I wanted to have soup since it was one of the first cooler days of fall. I was rushed and just sort of threw the soup together. It wasn’t bad but it was rather bland. It definitely needed some spicing up.

Here’s how I made the soup. I used:

Because I was rushed, I didn’t sauté any of the vegetables before adding the other ingredients. I decided it didn’t really matter.  The Instant Pot was full, almost overly so. I cooked the soup and served it up right away when my guests arrived.

I shouldn’t have been surprised but the soup was bland. It wasn’t bad but it sure wasn’t the best soup I’ve ever made.

Ideas for Spicing Up My Bland Vegetable Soup

I asked for advice on the Becoming Elli Facebook Group on spicing up my bland vegetable soup. Here’s the list of suggestions I received.

RustySue said to try Sriracha. That would add some kick, for sure.

Souza recommended adding carmelized onions. I wouldn’t have thought of that. I definitely wouldn’t have had the patience for this batch of soup but it’s great advice for a later batch.

Janet said she uses a veggie juice like V8 as the broth in place of water. I remember using V8 in the past but had forgotten about it. It’s a good way to add some flavor to the soup.

A couple of spoons of basil pesto was suggested by Karen. I would never have thought of that but it would be a nice addition.

Sherry had a suggestion that I could use on the bowl of soup. She said, “top it with some garlic bread croutons and feta cheese!” I think this would have been a great addition to my soup.

Beth recommended adding bay leaf or cumin. I had both of those in my spice cabinet. That would have worked.

Lisa suggested garlic and lots of salt.  I didn’t have garlic cloves but could have used garlic powder. I definitely under-salted the soup.  Lisa said she’s learned that salting more heavily really brings out the flavors in food.

Barbara said, “I add a beef billion cube, oregano, basil and garlic.” That would definitely spice up the soup. The bullion usually adds a lot of sodium so you get a lot of salty flavor.

“Six pepper, sparingly”, Laureen said. She added, “It adds flavor, a little heat.”  I did not know this spice blend so I had to look it up. It’s a spice blend made up of a mix of black and white pepper, red and green bell peppers, plus chili peppers. I suspect this would be a fantastic way for spicing up bland vegetable soup.

A suggestion made by MiMi was to add curry. This is a great reminder that I have a cabinet full of spices and that I could simply rummage around in it and find some easy ways to spice up any dish I’m making.

Bobbie’s answer was turmeric and cayenne pepper. For a while I was a big turmeric fan. I added it to a lot of things but then got out of the habit. I do like to use cayenne pepper too.

Start at the Beginning

I always find it difficult to season a soup after it’s been made, I usually try to add no sodium type flavors in the very beginning – you might try beginning with a bit of olive oil in the pan and adding just a few red pepper flakes, let cook a minute, then add onions until translucent, during this time, add pepper, paprika, a bit of garlic powder and if you want to kick it up a bit, cayenne pepper, or cumin depending on the flavor profile you like, cook for a minute or so, then begin to make your soup, see if this helps.

I think that is good advice.

Sue passed on a link from the Women Living Well after 50 website for a great sounding vegetable soup. I like the recipe and thought adding ginger was a fantastic idea.

After reading everyone’s suggestions, I’m now much more prepared to make a zestier vegetable soup. Also, I realized that our private Facebook Group is a great source of ideas. I just bought some greens and can’t decide what to do with them so I guess I should go to the Becoming Elli Facebook group and ask for advice.

Do you have any suggestions for spicing up my bland vegetable soup?