I returned from my trip abroad this summer and apparently my boyfriend missed me because he bought me  a pair of Trekz Air Wireless Bone Conduction Headphones by Aftershokz as a welcome home gift. I felt a little guilty because I brought him some souvenir gifts from Italy but I scored the fancy present. 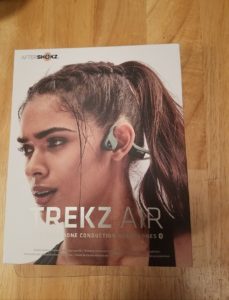 I’ve talked before about my running playlist. I enjoy listening to music or podcasts while I’m running. Last summer I bought a pair of Plantronics Bluetooth headphones for running and I really liked them. They have ear buds though which means that it makes it harder to hear what’s going o around me plus I’m always fiddling with the earbuds. I can deal with the earbuds when running on a treadmill but I like to run on local trails. I began to worry about safety while out running by myself. So, I tried running with just one earbud in and that worked OK but was not the best solution.

Shortly after buying the Bluetooth headphones, I went to a talk held at a local running store and while I was browsing, I saw these wireless bone conductive headphones. They had a sample there to try and I was thrilled by them and then sorry that I had just spent my headphone money on the earbuds version of Bluetooth headphones.

So, what are bone conduction headphones? They are headphones that rest just in front of the ear. The headphones conduct the sound through the bone so you hear while bypassing the eardrum. I thought that was the coolest thing. The advantage of them is that you can hear your music or podcast but also hear everything going on around you because your eardrum is not blocked by the earbuds. 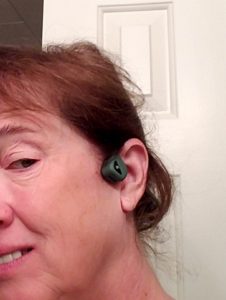 I love these headphones. They’re so light that I have forgotten that I’m wearing them. I realized the other day that I’d been walking around for quite a while with them still on my head.

The sound is good. I can listen to my running playlist at a low to moderate volume and hear it without problems. I think it sounds good with a good range of bass and treble. I’ve checked with a couple people and they have reported that they can’t hear the music so that’s a relief. I hate walking around with everyone being able to hear my sometimes-embarrassing playlist. That happened a lot when I was only wearing one earbud.

I like that I can talk on the phone while wearing them. Again, I’ve checked with a couple people and they say I sound great on their end.

They charge with a mini-USB charger. So, this might be a negative. I’ve noticed that the headphones won’t charge using the cord that I use to charge my phone and everything else I own. I’ve had to use the cable that came with the headphones. That’s fine as long as the cable doesn’t get lost. That’s been known to happen when people come to visit and want to borrow a charging cable.

The controls for these headphones are small buttons on the stem and on the actual piece that rests on the bone. This is my complaint with all Bluetooth headphones. I tend to forget which button does what so I’m often fumbling with the buttons and looking like an idiot. The controls on the Trekz Air seem to be somewhat easier to use but we’ll see what happens when I want to answer the phone while I’m out running.

I’ve worn them running and they were great. While wearing my sunglasses, hat, and headband, I added the wireless bone conduction headphones. They were comfortable and I heard the music without problem. I also conducted a lengthy conversation with someone without having to remove the headphones. I did get sweaty while wearing them and they continued to work fine. I’ve not worn them in rainy weather yet so can’t address that.

The Trekz Air Wireless Bone Conduction Headphones by Aftershokz cost somewhere between $90 and $120, based on my searches on Amazon. Apparently there are some different models and colors so the price seems to vary. I see that there are other brands of the same kind of the wireless bone conduction headphones but haven’t tried any of them.

The box includes the headphones, the charging cable, a carrying case that zippers, instructions, and ear plugs. The instructions say to use the ear plugs when it is safe to block out ambient noise such as being on a train or airplane. 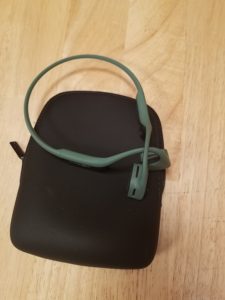 I highly recommend the Trekz Air wireless bone conduction headphones. They’re lightweight, comfortable, and allow you to listen to your playlist or podcast and still be aware of what’s happening around you. 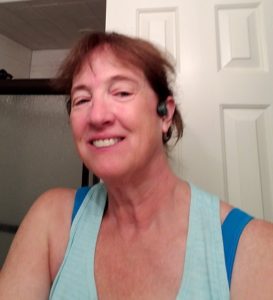