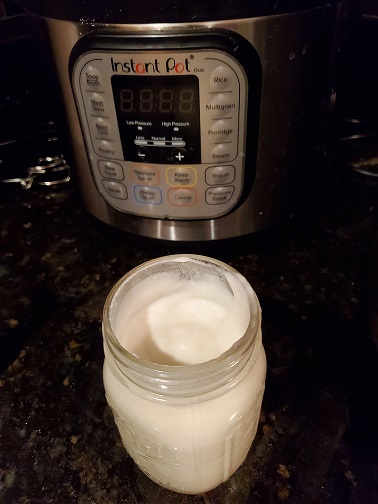 I figured out how to make coconut yogurt in the Instant Pot. It’s easy though it does take some time.

I’ve been trying to eat more fermented foods and when we talked with Christine Bailey on a recent podcast, she said yogurt was a great option. She also recommended coconut yogurt if you are not eating dairy.

I’ve been avoiding dairy for a few months because a doctor suggested that some of my skin problems might be related to dairy. Like most of us, I  love certain dairy products. Cheese, sour cream, cream in my coffee. I love all of that. But eliminating all of that has helped me feel better.

I do like yogurt. For a long time my go-to breakfast was plain Greek yogurt with berries and some granola on top. It was a tasty breakfast.

I suddenly remembered that my instant pot has a yogurt making option on it so I decided to try making my own coconut yogurt.

My first batch turned out pretty well but was rather runny. Coconut milk apparently is lacking some protein or something that causes milk yogurt to thicken. I ended up mixing it in my Vitamix with a little bit of vanilla extract and raspberries. It was a lot like the drinkable yogurts that you can buy in the grocery store. It tasted really good.

My second batch is a bit thicker because I added a teaspoon of unflavored gelatin to it.

As the starter for the yogurt I used plain Greek yogurt. I know it’s dairy but I figured the small amount that I added to the coconut milk is not going to hurt me. I’m not allergic to dairy. I’m just trying to avoid it to help my skin heal.

You can buy yogurt starter but buying a small container of yogurt at the store is a lot cheaper and easier. Now that I’ve made some yogurt, I can save a bit of it to use as a starter for the next batch. It’s like having a sour dough starter. Once you have some, just save it and keep using it as a starter.

I used a can of organic full fat coconut milk. I don’t know how light coconut milk would work. Definitely avoid the coconut milk that comes in a cardboard container. You want to use the canned milk.

I added the yogurt starter and a teaspoon of the unflavored gelatin and whisked it well. I then poured it into a mason jar, which I put in the Instant Pot. Then, I added some water to the bottom of the pot, put the lid on, and then set the yogurt time to 24 hours. I figured that would let it really ferment.

After the fermentation ended and I removed the jar from the Instant Pot, I put the yogurt in the refrigerator to let it set for several hours. 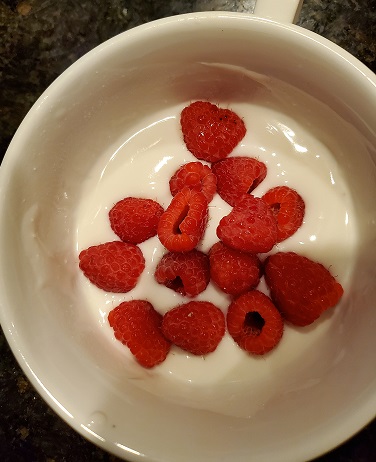 The coconut yogurt does not have a strong taste of coconut. As a treat or for my breakfast, I add some berries and a little vanilla extract but I am not big on adding sweetener. You certainly could if you wanted. You could also sprinkle some granola or chopped nuts on top for crunch.

Recipe for Coconut Yogurt in the Instant Pot

This is so easy, you’ll love it. 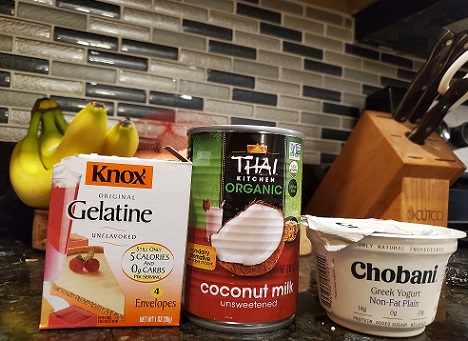 1 can of full fat coconut milk

2 teaspoons of unflavored gelatin (just use 1 teaspoon if you don’t want it too thick.)

Empty the coconut milk into a small mixing bow.

Add the Greek yogurt and the unflavored gelatin. Whisk well.

Pour the mixture into a mason jar or small bowl.

Place the jar in the Instant Pot.

Add one cup of water to the Instant Pot.

Select yogurt on the Instant Pot and then select time. I went with 24 hours to get a tangy flavor.

When it finishes, shake or whisk the yogurt well, cover, and put in the refrigerator. Wait several hours or even a day and then mix well again. Enjoy!

Make sure your mason jar or glass bowl are clean. I washed the jar in the dishwasher immediately before using.

Many yogurt instructions say to boil the milk first but because I was using canned coconut milk, I determined that was an unnecessary step. If you decide to do this, be sure to boil the coconut milk first and then let it cool before adding the Greek yogurt and gelatin.

If you make coconut yogurt or any kind of yogurt in your Instant Pot, let me know how it turns out.