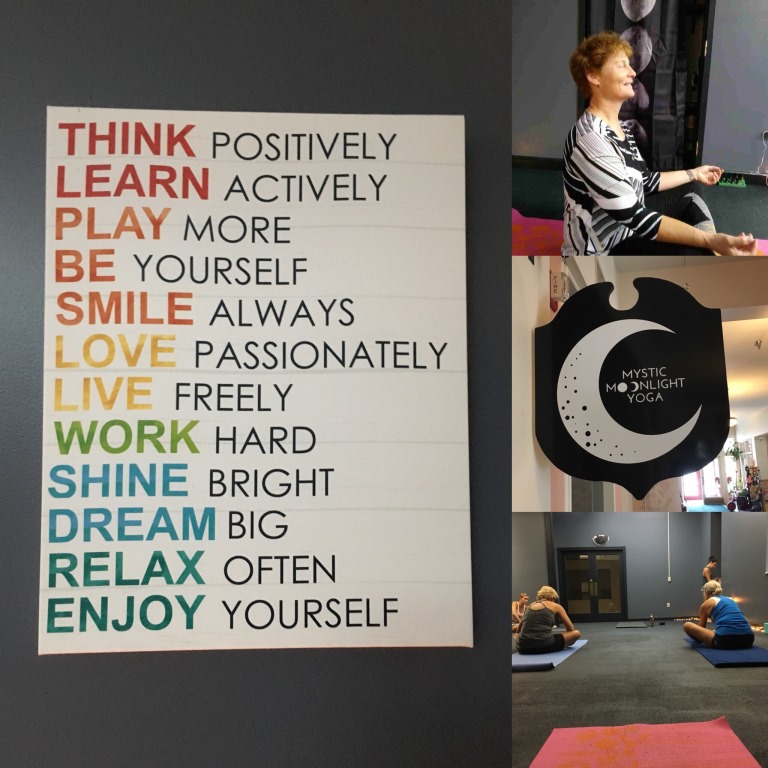 The thought of a “Yoga Practice” used to intimidate the heck out of me.

I had a lot of preconceived notions about yoga. For most of my life, I thought that yoga was made up of lot of impossible poses that looked very possibly painful. I pictured a session filled with an instructor calling out unusual animal names for poses and routines like dolphin, cow, alligator and up dog/downward dog… and me flopping around on a mat trying to get into odd positions. In my minds eye, all the others in the class would be tall, thin, limber people, who would immediately go into the routine without looking around trying to figure out what the heck we were doing. And there would be weird music. Weird incense smells. And maybe even some weird religious stuff.

In 2006, after I had hurt both ankles and was moving less and less (and gaining more & more weight), my marketing firm was asked to help develop a marketing program for a new local yoga studio that was moving into town. There were a couple women on the staff who were very excited to work on this, as they loved yoga.

Not me! Since I had never ever done yoga before, I would make that squinty-up-nose face with a slight shake of my head at the very thought of yoga. NO WAY will you ever drag me into a yoga class. I was more than happy to leave the whole yoga project to someone else!

It didn’t help that the owner was a thin, incredibly muscular woman who insisted that power yoga was not for sissies as it was “incredibly challenging.”  She confirmed for me that I didn’t want anything to do with the project and definitely didn’t want to think about developing a yoga practice of my own.

However, in 2012, when some of my good bike-riding friends mentioned that we should all take a yoga class together, I remember thinking “UGH-OH, I don’t know the first thing about yoga.” That was enough for me to explore what yoga is all about. I fully expected to hate it. But I didn’t want to look foolish in front of my friends. (Many of my friends never did go do yoga, but it got me going!)

So I started with a yoga “fusion” class that was part work-out with a little Pilates and a little yoga thrown into the moves. It was in a closed room with about four other women. The instructor was very friendly and not at all intimidating. The music was fun. That gave me the courage to try other classes. Vinyasa Flow. Restorative Yoga. Power Yoga.

Over the next six years, I’ve taken different types of yoga classes at different places/studios with different instructors.

And guess what? Some of the things I dreaded about it, I love now.

Things I have grown to love about my yoga practice:

I have come to understand that EVERYONE is in a different phase of yoga. That is the practice part.

Some of the things I worried about are the things that I really enjoy now. Getting calm and centering my mind. Paying attention to my breathing. Adjusting where my body is in a pose to get a little deeper or straighter or stay a little longer with it. 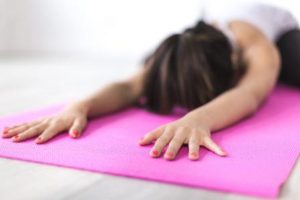 I still don’t like instructors who try to intimidate you with their knowledge or attitude. (But that feeling is not limited to yoga!)

I’ve only encountered two of those. I’ve taken many classes now and over the last 6 years I have found about 15 instructors who are amazing, kind, thoughtful, and earnest in providing a wonderful experience.

I found out that you don’t have to be perfect to start. In fact, you shouldn’t expect yourself to be good at all to start. And learning to silence that constant negative voice in your head that is judging yourself is all part of learning yoga and improves with practice.

I also learned that it is called a practice because you’re on a continuum. Always learning. Always improving. (It’s kinda like BECOMING ELLI… we’re all on our way to becoming!) 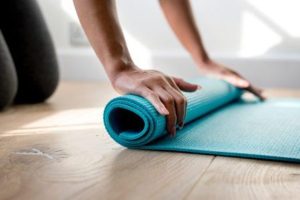 I have also learned that it is a good opposite to running, Yoga has become part of my cross training for muscles, joints and ligaments that are over used and not stretched enough.

There are still plenty of hard parts:

So, if you don’t do yoga, my challenge to you is to try a yoga class. Be open to it. To remember that EVERYONE who currently does yoga, also had their first day. Select a gentle yoga class to begin and arrive early to check out the instructor. Get the vibe to see how they may react to you.

If you are currently doing yoga, what are you working on right now? What do you like most about it? What still bothers you?