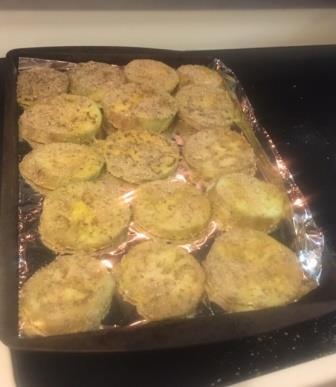 Today’s eggplant veggie challenge uses purple eggplants but they do come in other colors too. 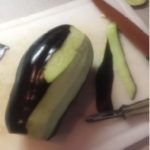 Eggplant is considered a nightshade vegetable, similar to peppers, tomatoes and tomatillos. You can tell it is a nightshade because it has an elf cap on it’s stem. Buying eggplant was intentional for me. It is not the type of vegetable that I routinely pop into my cart during the weekly grocery shopping (unlike carrots, celery, peppers and cauliflower.)

I was surprised to find out that botanically speaking, eggplant is actually a fruit. I guess that makes sense because although I’m calling them a vegetable for the Veggie Challenge, they have seeds on the inside and are the “fruit” of the plant. As a fruit, they are the part of the plant that bears fruit and has seeds in the middle. So I guess other nightshades. as well as cucumbers, peas and pumpkins. are fruit too, although, I would classify them as a vegetable. I think cooks and most people consider them a vegetable.

The legal definition of a vegetable tends to lead to what cooks consider the fruit. For example, tomatoes are taxed as a vegetable even through they are technically a fruit.

Vegetables are technically the roots, stems and leaves of a plant. 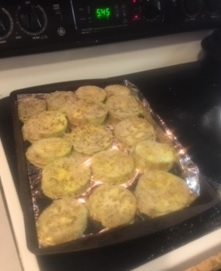 Eggplant can be a great low carb swap for noodles in lasagna or other recipes. A nutrient dense food, one cup of eggplant, cubed and cooked, has only 35 calories and has good fiber, copper, potassium and manganese. 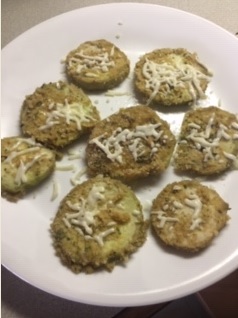 This eggplant veggie challenge is easy to make:

Of course if I skipped the bread crumbs, they would be lower in carbohydrates. 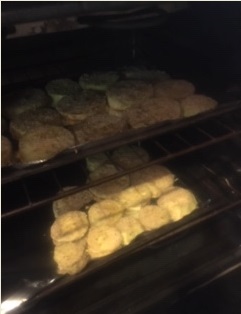 Later, I pulled this eggplant veggie challenge out of refrigerator, sprinkled them with a little parmigiana cheese and shredded mozzarella cheese. Then I microwaved them 30 seconds to take the chill off and to melt the cheese. I added salt and pepper to taste.

Do you have a recipe you enjoy for eggplant? Bake? Saute? How do you prepare it?