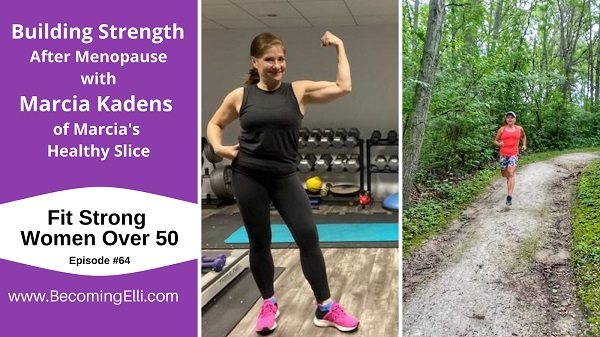 In Episode 64, Jill and Chris interview Marcia Kadens, a fitness enthusiast who has run 14 full marathons, including the Six World Marathon Majors as well as hundreds of shorter races.

In this episode she discusses how her running schedule has changed after 50, her thoughts and tips for building strength after menopause, and nutrition tips. Marcia is a Chicago-area mom of two teenaged daughters.

Her first marathon in 2010 has super hot weather and the race was called off shortly after she finished. She completed her second one was a week or two afterwards 40° temperatures and was able to Boston Qualify (BQ) with the second marathon “Running Boston was memorable and surreal.”

Hitting 50 and menopause was a big change for her. She found the cortisol is high and women tend to store fat with more cortisol.

Now she no longer runs marathons, but instead runs an hour or less. She has embraced trails and runs for the joy of it. It also helps her mental state, her sense of accomplishment, and relieves stress.

Many people are more susceptible to falling or injury prone as they age so it is even more important to keep the muscle, strength train and honor your recovery time.

She does HIIT (High Impact Intensity training) or speed work, but no longer does extremely long endurance runs, because she’s found that it doesn’t help her overall fitness.

Marcia coaches others to help them run for the joy of it as well. She started running trails in 2012 when she was training for the Marine Corps marathon. Her coaching is primarily with women over 40, from all over the country, she creates plans based on the varied goals of her clients.

Hydration and electrolyte balance is important and getting the right carbs/protein mix. She says that fueling for runs can be different based on the individual.

How does she define fit? “It’s mind body and spirit. Relationships with people your mindset is much more important than how you look.”

Marcia has Hashimoto’s disease and did a six week autoimmune diet. She found that it helped her to become gluten-free and soy free. With her thyroid issues she tried to stints of intermittent fasting but found that it didn’t work for her. She now avoids refined carbs and sugar. She finds ways to buffer the production of cortisol.

Links:
Reach out to Marcia via her website: http://www.marciashealthyslice.com

Her “go to” recipe is grilled fish. She used to be a little afraid of cooking fish but found a small boat fishermen family in Alaska that will ship direct. She says it’s easy to prepare the cod and black cod with some olive oil, citrus zest and just cook on the grill for 10 minutes. Her fish has omega threes which are so important for women over 50. The website is https://sitkasalmonshares.com/ Use code MHS for Marcia’s Healthy Slice to get a discount.

2 thoughts on “Building Strength After Menopause with Marcia Kadens”