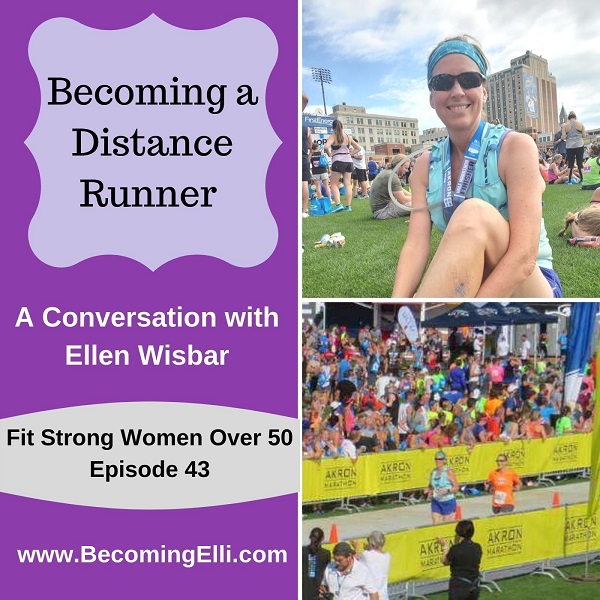 In episode 43, Chris and Jill talk with Ellen Wisbar, a CPA who started building her running distance over the past year.

Ellen Wisbar grew up on the west side of Cleveland and has always been interested in sports. She played volleyball and was on the track team in high school. At Miami University she moved on to intramural sports and graduated in 1985 with a Bachelors degree in Accounting. After graduation, Ellen stayed active by sustaining a gym membership at various locations in Cleveland, running very casually, group exercise classes, skiing, biking, and participating in things like Corporate Challenge at work. Ellen is a CPA so by nature her job is pretty sedentary. At this point, she work in the legal department, which requires some travel but no tax season hours anymore.

Last summer she completed a 5k in June for the first time ever without walking. After telling a friend at LifeCenter about it, she invited Ellen to join a running group called Moms Run This Town. The informal running group schedules coffee runs each week, which helped her start running more consistently. Soon she was working to become a distance runner.

She ran the 10K Great Pumpkin Run in Akron last October, the Cleveland Half Marathon this past May and then the Akron Half in September.

In this episode, they discuss:

Links to things mentioned in this podcast:

Stats for the 2019 Akron Children’s Hospital Marathon, Half Marathon and Relay